My other quilt find on holiday was a biblical quilt at Cartmel Priory.  I did not get much of a look at it, as Emily was more interested in the people buried under the floor, who she found were mainly called John and she found a Jane too!  I had not heard of a biblical quilt before and did not realise until after that all the blocks had a biblical theme and verse attached to them.  The designs in the quilt were taken from Biblical Blocks by Rosemary Makhan.  The quilt in the priory was made by a lady called Muriel Millard and donated to the priory in her memory.  I should have paid more attention and taken some pictures.  Oh well a good excuse to visit again.  The priory is very impressive and well worth a visit, it is wheelchair accessible.

A Google search brings up many varieties of biblical quilt, the one that is most similar in appearance to the one in the priory is this one on a blog called Quilts by Rosemary that is the Rosemary who wrote the book.  A further search informs that Rosemary died on January 26th 2014.  Her beautiful designs certainly live on. 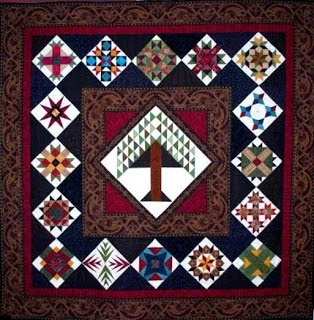 Still on the subject of quilts, this week has been the Festival of quilts at the NEC Birmingham.  I would love to have been able to go.  My quilting teacher Sarah Humphreys is running workshops and I am sure she will have lots to tell the class on Friday, but I won't be there due to school holidays. I will have to wait and see if she writes about it in her blog or newsletter. I still haven't had my birthday trip to Quilt Museum in York and its nearly 2 months since my birthday, looks like it might be next years trip now!
Posted by Jane at 16:56

Crafting with ME by Email